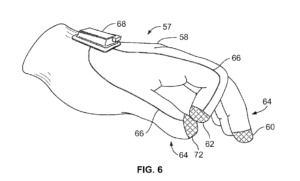 Wearable technology is nothing new to cycling apparel – from heart rate and fitness trackers to jackets illuminated by LEDS. But lurking in R&D departments of bicycle component manufacturers is something altogether different. Bicycle shifters: wearable technology — designs that meld clothing with shifters. Namely, gloves and other handwear that include wireless controls for operating electronic derailleur systems.

Such an approach is only possible thanks to wireless communication systems. SRAM was the first to offer wireless shifting, with its introduction of eTap in 2015. Meanwhile, patent filings show that both Shimano and Campagnolo are also working on wireless shifting, though to date no such systems have been shown by either company.

In January 2013, when SRAM was presumably deep in the development of eTap, they filed patent application 13/750,648, “CONTROL DEVICE FOR BICYCLE AND METHODS”, with Kevin Wesling as the sole inventor. Wesling is currently Director of Advanced Development at SRAM.

The patent application shows a wearable control device that communicates wirelessly to bicycle components, derailleurs in particular. Also disclosed is the wireless control of suspension, plus peripherals like lights, GPS, powermeters, etc. Several versions of the control device are shown, with the one described in the greatest detail being incorporated into a glove. A helmet-mounted version that accepts voice inputs via a microphone is another embodiment, though described in less detail than the glove version.

The glove uses several tactile buttons at the fingertips, which are wired to a processor, transmitter, and battery, shown on the back of the glove. Button types can be pressure sensitive switches like mechanical  and piezo types, operated by pressing a fingertip against a hard surface like the handlebars or brake lever – or another fingertip. Also shown are conductive-type sensors that work by touching two fingertips together. Other sensors envisioned for the system use acceleration or change-of-position to initiate a shift. These are built into right and left gloves, for controlling front and rear derailleurs respectively, or both derailleurs can be controlled by buttons on a single hand. The electronics may be removable to allow washing the glove.

The clear difference compared to the earlier SRAM patent filing, which Campagnolo cites in its application, is that the design is a one piece unit. Switches, transmitter, and all other electronics are contained in a single pod which straps to a finger/thumb, rather than being integrated into a glove. The pod may optionally include a cyclometer-style display, to show riding metrics like speed, distance, etc.  – with gear ratio numbers also easily included.

The Campy design eliminates wires-down-the-back-of-the-glove as in the SRAM configuration. But of course, this requires the full pod to be attached to a finger or thumb – care would be needed when  reaching into your back pocket for a snack, for instance.  If the package could be miniaturized enough, it could remain unobtrusive.

Campy describes a wide selection of proximity and contact sensor types to signal a shift. The contact type sensors are similar to SRAM’s system, but the proximity sensors include magnetic types. For example, a magnetic band is placed on at least one finger, or a magnetic strip is attached to an area of the handlebars. Move the sensor close to one of the magnets, and a shift command is sent.

Build it or Bury It?

SRAM and Campagnolo, along with Shimano of course, produce almost all derailleurs and shifters currently sold. Wireless shifting, in theory, opens up the possibility of third parties breaking into shifter sales by offering wearables (or bar-mounted pods) that can communicate with the major brands’ electronic derailleurs. A small electronic gadget likely presents a lower barrier to entry than producing an entire compatible brake/shift lever – though proprietary wireless protocols like SRAM’s Airea certainly present obstacles.  There could be an easier path should Campy or Shimano use an existing technology like ANT or Bluetooth.

Monkeying with electronic shifting is nothing new: Fairwheel Bikes of Tuscon AZ hacked into Shimano’s Di2 back in 2010, shortly after Shimano released the system. Meanwhile, prior art cited by the US Patent & Trademark Office in SRAM’s proceedings shows earlier versions of wearables, like US Patent application 13/520900, HAND WEARABLE CONTROL APPARATUS – a  single-fingered glove with integrated buttons for controlling GPS and similar functions.

Are Campagnolo or SRAM using their patent applications as part of an intellectual property strategy to block others from entering the wireless shifter space, with little intention of actually producing the wearable items? Or are finger-clicking shifters on the horizon? Only time will tell. 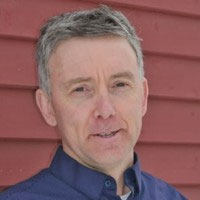